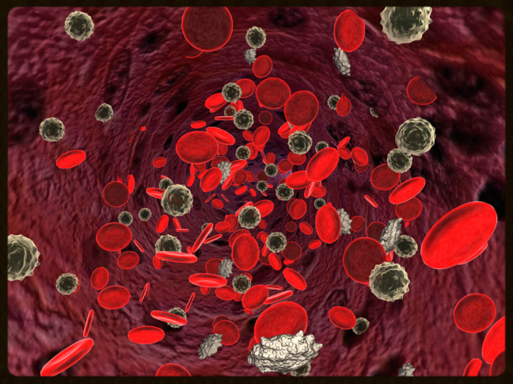 Anemia in Kidney Disease and Dialysis
If your blood is low in red blood cells, you have anemia. Red blood cells carry oxygen (O2) to tissues and organs throughout your body and enable them to use the energy from food. Without oxygen, these tissues and organs--particularly the heart and brain--may not do their jobs as well as they should. For this reason, if you have anemia, you may tire easily and look pale. Anemia may also contribute to heart problems.

Laboratory Tests
A complete blood count (CBC), a laboratory test performed on a sample of your blood, includes a determination of your hematocrit (Hct), the percentage of the blood that consists of red blood cells. The CBC also measures the amount of Hgb in your blood. The range of normal Hct and Hgb in women who menstruate is slightly lower than for healthy men or healthy postmenopausal women. The Hgb is usually about one-third the value of the Hct.

When Anemia Begins
Anemia may begin to develop in the early stages of kidney disease, when you still have 20 percent to 50 percent of your normal kidney function. This partial loss of kidney function is often called chronic renal insufficiency. Anemia tends to worsen as kidney disease progresses. End-stage kidney failure, the point at which dialysis or kidney transplantation becomes necessary, doesn't occur until you have only about 10 percent of your kidney function remaining. Nearly everyone with end-stage kidney failure has anemia.

Diagnosis
If you have lost at least half of normal kidney function (based on your glomerular filtration rate calculated using your serum creatinine measurement) and have a low Hct, the most likely cause of anemia is decreased EPO production. The National Kidney Foundation's Dialysis Outcomes Quality Initiative (DOQI) recommends that doctors begin a detailed evaluation of anemia in men and postmenopausal women on dialysis when the Hct value falls below 37 percent. For women of childbearing age, evaluation should begin when the Hct falls below 33 percent. The evaluation will include tests for iron deficiency and blood loss in the stool to be certain there are no other reasons for the anemia.
Source: The National Kidney Foundation's Dialysis Outcomes Quality Initiative.

Treatments
Erythropoietin (EPO)
If no other cause for EPO deficiency is found, it can be treated with a genetically engineered form of the hormone, which is usually injected under the skin two or three times a week. Hemodialysis patients who can't tolerate EPO shots may receive the hormone intravenously during treatment, but this method requires a larger, more expensive dose and may not be as effective. DOQI recommends that patients treated with EPO therapy should achieve a target Hgb of 11 to 12 g/dL.

Iron
Many people with kidney disease need both EPO and iron supplements to raise their Hct to a satisfactory level. If your iron levels are too low, EPO won't help and you'll continue to experience the effects of anemia. You may be able to take an iron pill, but many studies show that iron pills don't work as well in people with kidney failure as iron given intravenously. Iron is injected directly into an arm or into the tube that returns blood to your body during hemodialysis.

A nurse or doctor will give you a test dose because a very small number of people (less than 1 percent) have a bad reaction to iron injections. If you begin to wheeze or have trouble breathing, your health care provider can administer epinephrine or corticosteroids to counter the reaction. Even though the risk is small, you'll be asked to sign a form stating that you understand the possible reaction and that you agree to have the treatment. Talk with your health care provider if you have any questions.

In addition to measuring your Hct and Hgb, your tests will also include two measurements to show whether you have enough iron.

* Your ferritin level indicates the amount of iron stored in your body. According to DOQI guidelines, your ferritin score should be no less than 100 micrograms per liter (mcg/L) and no more than 800 mcg/L.

* TSAT stands for transferrin saturation, a score that indicates how much iron is available to make red blood cells. DOQI guidelines call for a TSAT score between 20 percent and 50 percent.

Other Causes of Anemia
In addition to EPO and iron, a few people may also need vitamin B12 and folic acid supplements.

If EPO, iron, vitamin B12, and folic acid all fail, your doctor should look for other causes such as sickle cell disease or an inflammatory problem. At one time, aluminum poisoning contributed to anemia in people with kidney failure because many phosphate binders used to treat bone disease caused by kidney failure were antacids that contained aluminum. But aluminum-free alternatives are now widely available. Be sure your phosphate binder and your other drugs are free of aluminum.

Anemia keeps many people with kidney disease from feeling their best. But EPO treatments help most patients raise their Hgb, feel better, live longer, and have more energy.